Santa Eulalia de Oscos Asturian council located in the western area of ​​the province and which is framed within the region of Oscos. It limits to the north with Villanueva de Oscos, to the south and the west with the Galician province of Lugo, and to the east adjoins with Villanueva de Oscos, San Martin de Oscos and Grandas de Salime. It has a small area of ​​46.9 km2. The main access road to the council is the regional road AS-27, which comes from Vegadeo. Its soil is mostly Cambrian and Silurian, with materials from the Paleozoic era, among which the slate stands out, deformed by the Hercian orogeny that give shape to the current relief, with a north-south orientation of its mountains, between which its rivers originate narrow and tight valleys. The topography of the council can be said that it is abundant and of an average altitude, predominating the peaks located between 400 and 800 meters, exactly 86.7% of the total land. In the western area we have the Sendiña cordal and part of the Sierra de Barbeilos that borders the neighboring Galicia. In the north we find the Sierra del Ouroso, which contains the maximum height of the council, the Pasadoiro peak with 984 meters.

The main river of the council is the Agüeira that crosses the floor of Santa Eulalia in northwest-southwest direction. Two rivers that flow their waters in the Agüeira are the Barcia, that serves as limit, in its birth, of the councils of Villanueva and Santa Eulalia; And on the other hand the Murias River, inside which we can contemplate the waterfall of Seimeira de Murias, a spectacular place. The climate is the same, as a general rule, that prevails throughout the province, but its relief together with its relative distance from the sea make it present certain characteristics of the continental, with less rainfall and much drier and hot summers. Regarding its vegetation, it should be noted that the forest land occupies 73% of the total area. The thicket is the dominant species, mainly due to the fierce deforestation suffered due to fires and the felling of trees, which have gradually disappeared or reduced species such as oaks, chestnuts, birches.

Capital Santa Eulalia de Oscos is the capital of the municipality of its name, which belongs together with Villanueva and San Martín to the Oscos region. It is located at a height of 547 meters and it is inhabited by more than a hundred people, being the most populated core of the council. Agriculture is still the economic engine of the town, although lately, the tourism sector has had a considerable boom in the area. 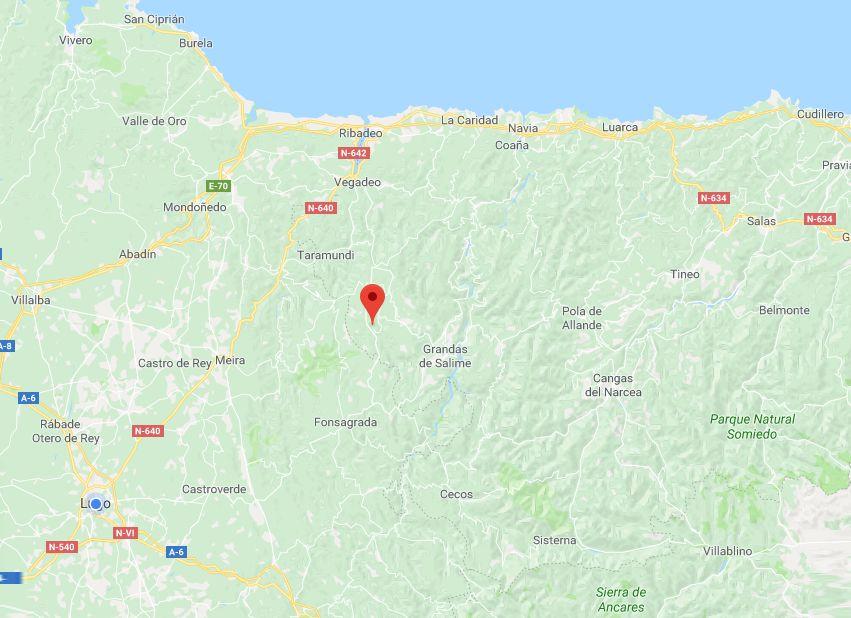 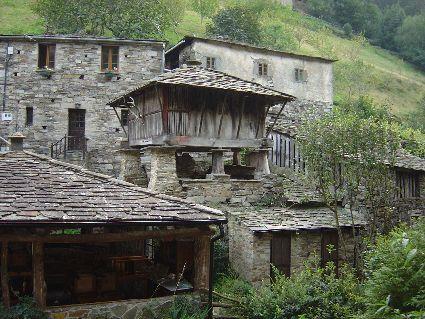 Like the neighboring councils belonging to the Oscos region, Santa Eulalia presents a typical dwelling that is clearly integrated into the council’s typology. This house uses the materials of the council floor, using the slate for the external walls and the roofs of the houses, and the wood for the beams, the windows, the doors. Here it is also usual to contemplate complementary buildings for agricultural use, such as granaries, hutches, cabins and stables.

We will mention as elements of artistic interest the constructions linked to the iron industry, of great importance in Santa Eulalia from the 17th century until the appearance of the modern iron and steel industry in the central zone of the principality. Among these elements we will talk about several decks located in the vicinity of the Agüeira River, the most recent being the Mazanovos that includes a mallet and forge. Within the religious architecture we will emphasize in the first place the church of Santa Eulalia that presents as more characteristic elements a tower and bulrush, conserving in its interior an altarpiece of baroque nature.
Other important churches are the Nuestra Señora de los Remedios in Nonade, as well as several rural chapels scattered throughout the council such as Quintá or San Simón in Brañavella.

From its civil and popular architecture we will allude to the “La Casona” cobla of La Pruida (of the Grafía family), in Santa Eulalia, built in the 17th and 18th centuries. It is necessary to emphasize in its interior a chapel. We also highlight the house of Aquel Cabo (or Enita), construction of agricultural character of 1862, in Barcia, with housing, chapel, cabazo and other complementary facilities. It is a Historic-Artistic Monument. The house, built with walls and slate roof, is divided into two floors with balconies in beam.

In Ferreirela we have the birthplace of Antonio Raimundo Ibáñez Gastón de Isaba and Llano, Marqués de Sargadelos, founder of the Foundry and Ceramic Factories of Sargadelos (Lugo). The construction dates from the 18th century. In the town of A Valía we find the Lombardi tower.

Activities you can do 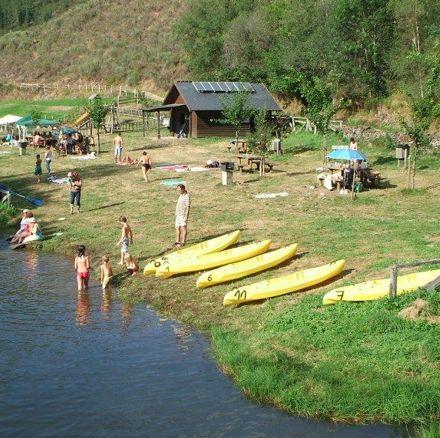 In the recreational area of Ferreira you can enjoy swimming area and canoe rental. 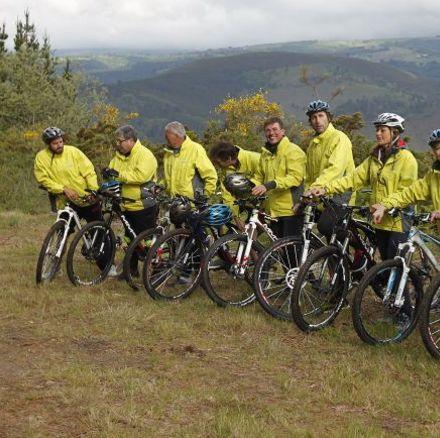 Asturias is a natural adventure field, where you can make a descent by bicycle, practice Nordic Walking combined with a fun gymkana … 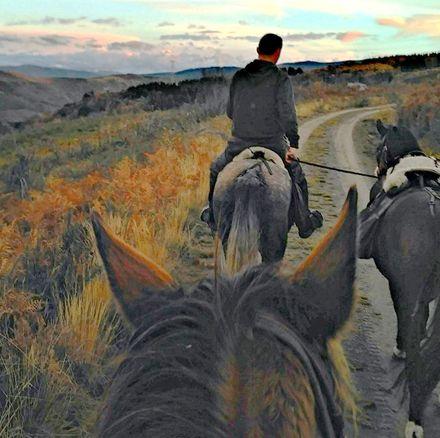 Equestrian routes adapted to children and adults, looking for shaded areas in summer and shelter in winter. 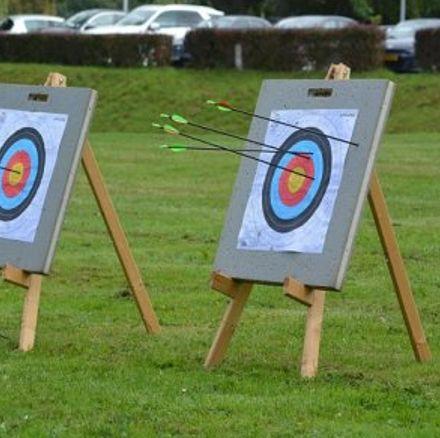 Located in Castropol. 25 minutes by car

The route begins in the recreational area of ​​Pumares, we cross the road and we go parallel to the river to Pumares, a town of old ferreira activity where we can still see the remains of an old mallet.

From here, along a signposted path, and leaving the Agüeira River on our left, we continue a slight ascent into a legendary forest characterized by ribera species (alders, ash, willow and hazel) and oak and chestnut trees that with their capricious forms are true monuments.

Most of the way is guarded by stone walls adorned with moss, with a soft carpet of leaf litter that cushions our steps.

Already in the Ancadeira we passed the side of several abandoned buildings that show us the importance of the place.

We continue through the magical and lonely “Valley of the Desterrado” that takes us to a crossroads where we can continue straight ahead until reaching the waterfall (seimeira) of about 30 meters of fall or turn aside to the left crossing a small bridge that will take us After a slight ascent to the town of Busqueimado where we can visit the chapel, consecrated to San Pedro, accompanied by two impressive yew trees cataloged as a natural monument.

The way back will be done by the same path in the opposite direction. 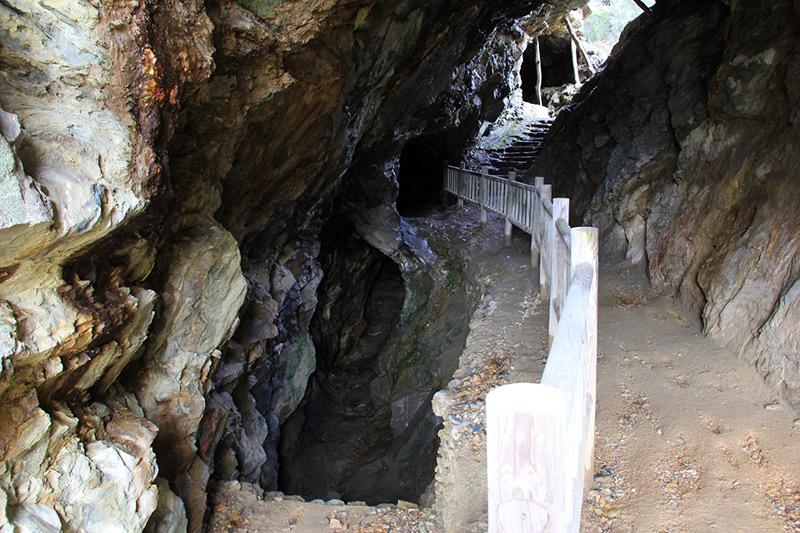 A Mina de As Talladas Route

The route begins at the Sta Eulalia de Oscos square, descending to the lower part of the town and continuing along a beautiful path that, surrounded by native forest, takes us to Ferreirela de Baxo, where it is worthwhile to stop and visit the Museo Casa Birth of the Marques de Sargadelos.

Continuing the road we descend to the vicinity of the Agüeira River that accompanies us to “As Barreiras” where it takes the waters of the Vilanova River.

Already in Ferreira and after taking a walk through the town we crossed the Agüeira River by a beautiful stone bridge that leaves us next to the tourist area, where we can rest or perform all kinds of water activities.

We continue with a slight ascent that going through As Talladas takes us to the area of ​​the Carmina mine. This mine has been exploited for the last time in the 50s and 60s, extracting from it important amounts of mineral formed by silver, zinc and lead.

From the place where the old cable car that transported the mineral to San Martin was set up, we started our way back following a path that runs halfway down the slope, allowing us unbeatable views of the entire valley.

We cross the river Vilanova through a wooden bridge in a wooded area, where alders, chestnuts and oaks shelter the walker who gets lost under his glasses.

We passed Caraduxe and Ferreirela de Riba to reach our starting point.

Forest route (half mountain) and villages of craft activity. From the outskirts of Santalla you can enjoy the traditional crafts of the area, such as the loom and shop of Irene Villar.

In Mazonovo, the mallet and the own works in iron.

In Brañavella, Antonio Magadan continues making the “Luna” knives as his ancestors.

In Barreiras, sporadic works in stone after enjoying the natural beauty of the Ferreira Valley.

Finally, in Ferreirela d’Abaxo, an inexcusable visit to the birthplace of the Marquis of Sargadelos and back to Santalla. 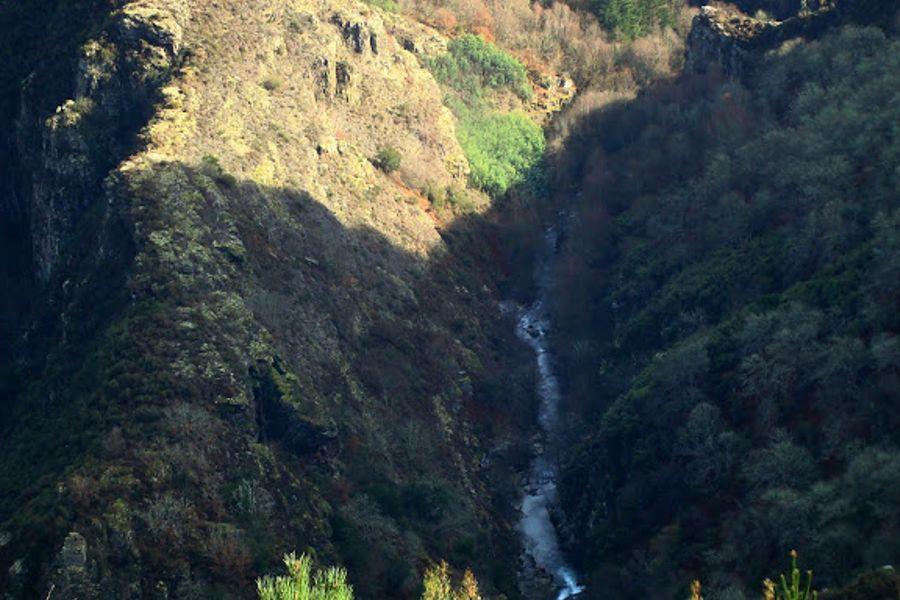 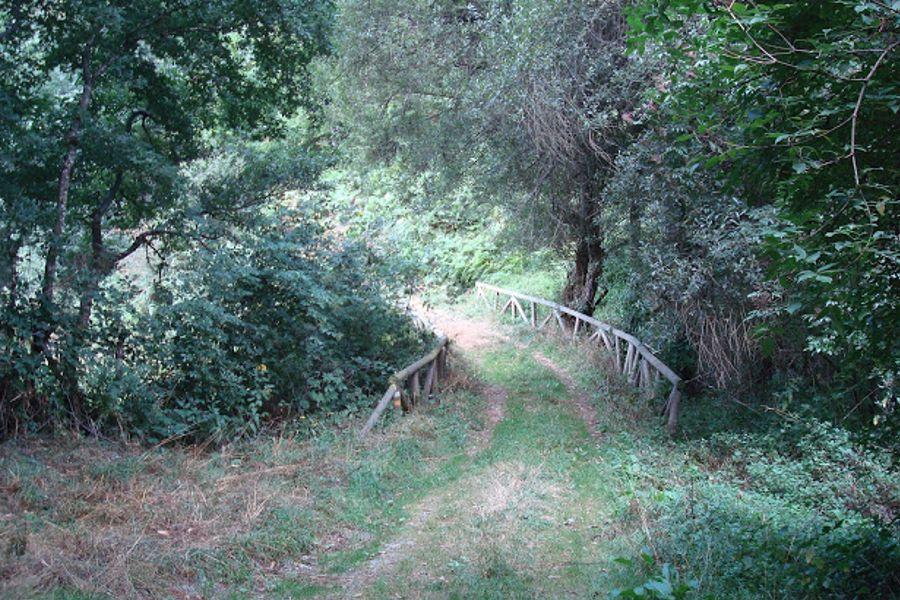 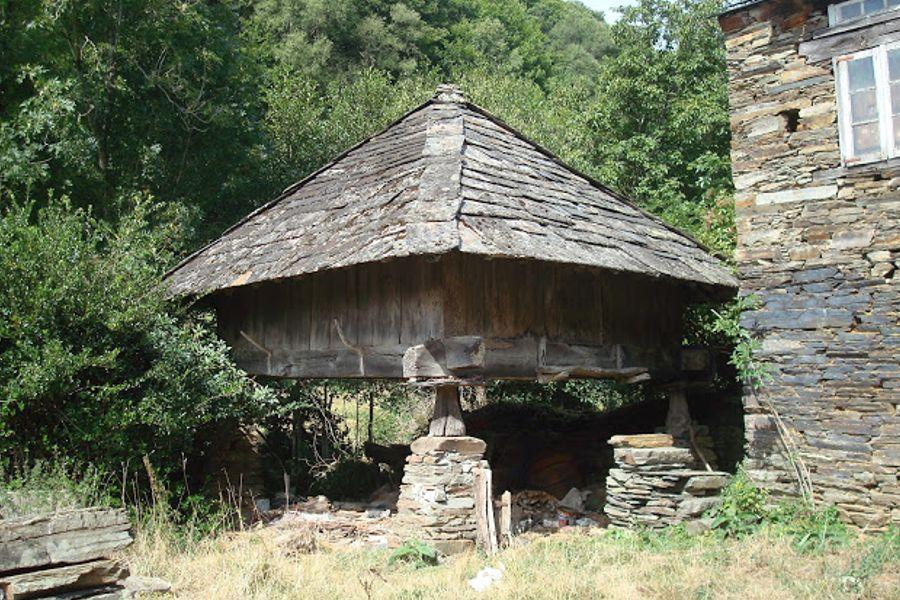 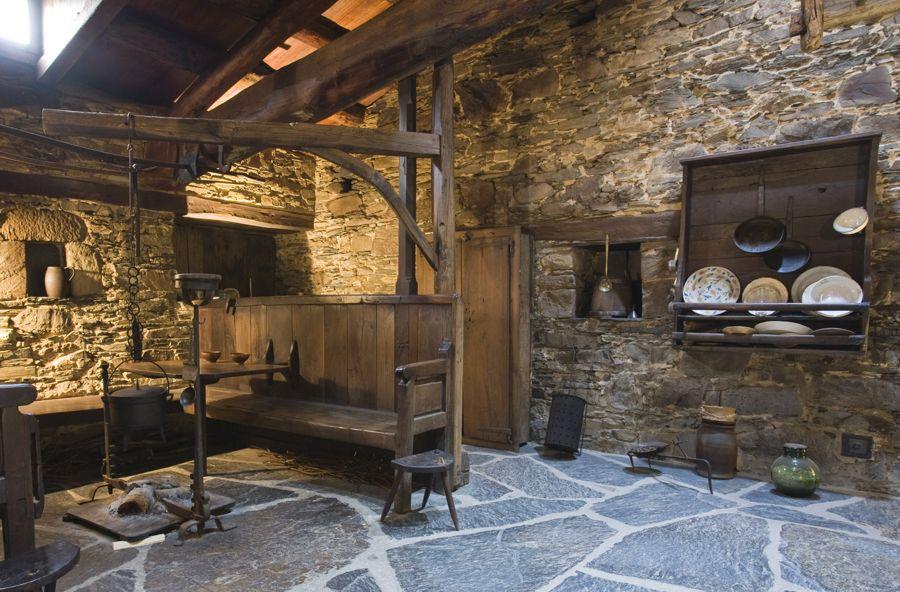 The Museum, located in the small village of Ferreirela de Baxo, houses an exhibition space dedicated to the life and work of this merchant, industrial and enlightened, who at the end of the 18th century built in Sargadelos (Cervo, Lugo) one of the first foundry cast iron and earthenware factories in Spain.

The exhibition highlights the link of this character to his homeland, where there has been an important wrought iron industry since ancient times, and seeks to sensitize the population to the conservation of the indigenous cultural heritage.

Crafts offers you a different way of doing Rural Tourism. In Asturias, in the middle of the Oscos, Eo and Terras de Burón Biosphere Reserve. We invite you to learn in an easy and fun way to develop authentic craft products such as beer, honey, cosmetics, … applying simple techniques that our ancestors used. The stressful pace of life, especially in large cities, has gradually made us forget the pleasure of creating with our own hands.

Live an unforgettable experience, learning with Craftsmanship and enjoying an extraordinary environment.

A sledgehammer XVIII, active in the 21st century. La Ferrería de Mazonovo is located about 5 km from Santa Eulalia. This set is restored and rehabilitated in its entirety for the understanding of the iron industry. In it you can forge your own nail and take it as a souvenir.